Bell Media’s Entertainment and Lifestyle digital team was encountering two recurring challenges when it came to executing their on-site content executions: (1) Strapped internal resources during seasonal upswings and (2) Not having enough time to create and execute net-new content templates and presentation formats.

“In the past, we’d undertaken a manual approach to projects to support some of our programs, which was time-consuming and too high-touch.”

Project timelines the digital teams worked on could also vary significantly. For example, just-announced items were very time-sensitive and needed to be executed as soon as possible, while in other cases, adequate time was available to develop a plan and be thoughtful about execution.

In particular, Bell Media was looking for help in the digital execution of two of their largest events: the iHeartRadio Much Music Video Awards (iHeartRadio MMVAs) and the Canada In A Day CTV documentary release to celebrate Canada’s 150th birthday, both of which required advance planning and flexibility for unplanned real-time modifications.

So, if a new technology was to be incorporated into their workflow processes, it needed to be able to address a variety of use cases including being able to increase audience engagement, being easy to implement and use, requiring low internal resource lift, and needing low maintenance post-purchase.

Rock Content Engage was used by Bell Media to create unique and engaging digital experiences for their audiences in ways that the brand had never been able to execute beforehand.

The iHeartRadio MMVAs are annual awards presented by the Canadian television channel MUCH to honor the year’s best music videos.

Rock Content Engage’s Pinboard functionality was deployed on the website, where audiences could go to see curated content related to the event. This included real-time videos, planned videos, images related to the actual show, performers and guests, and social media content. 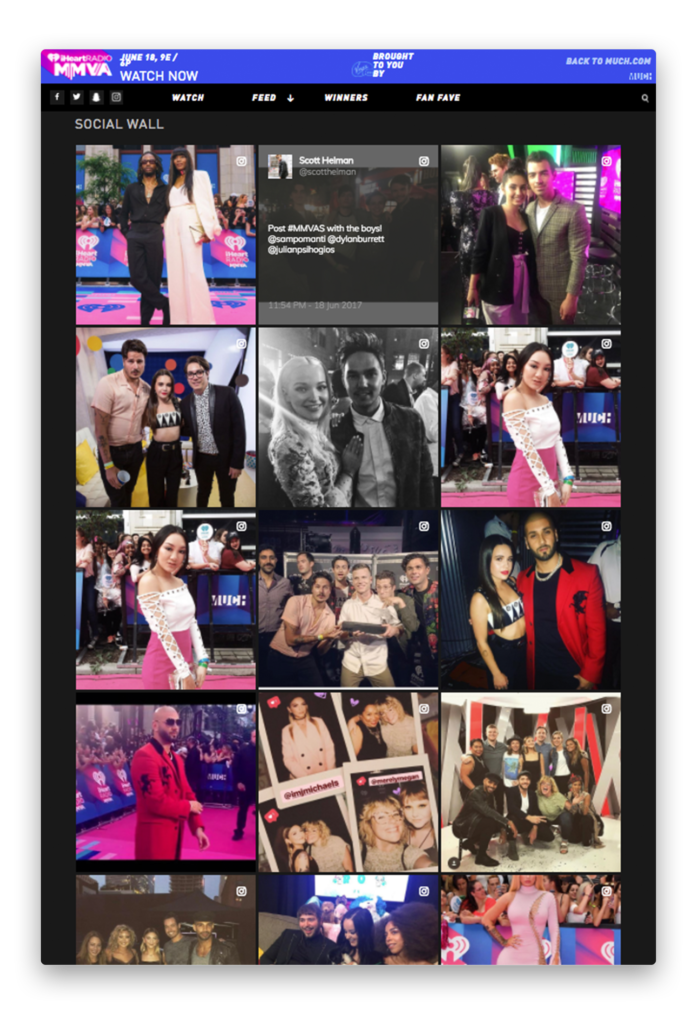 Canada In A Day

Canada In A Day was a CTV documentary that celebrated Canada’s 150th birthday. It was made entirely from videos submitted online by Canadians. Over 16,000 videos were submitted and 200 of those were included in the documentary.

The Digital Product and Content Teams had been involved from the very start of the project, including planning a section of the CTV.ca website to feature the final show. What they didn’t anticipate was the need to be able to credit all the contributors, including those whose videos were not included in the documentary. The list would be too long to include in the actual show that aired on television. Allison recalls the situation:

“Bell Media wanted to be able to feature and thank the 10,000+ Canadians who submitted video footage for the program. We were looking for a way to recognize people who had contributed, so we asked, ‘Hey, you guys have anything that can help us do this?’ Not to mention, we were launching the show in five days!”

With a 5-day turnaround, Rock Content Engage’s Pinboard and Storytelling features were able to solve this last-minute hurdle.

The Storytelling feature was used to visually display the credited names by province. Each person was recognized by their full name against beautiful imagery of their respective province. 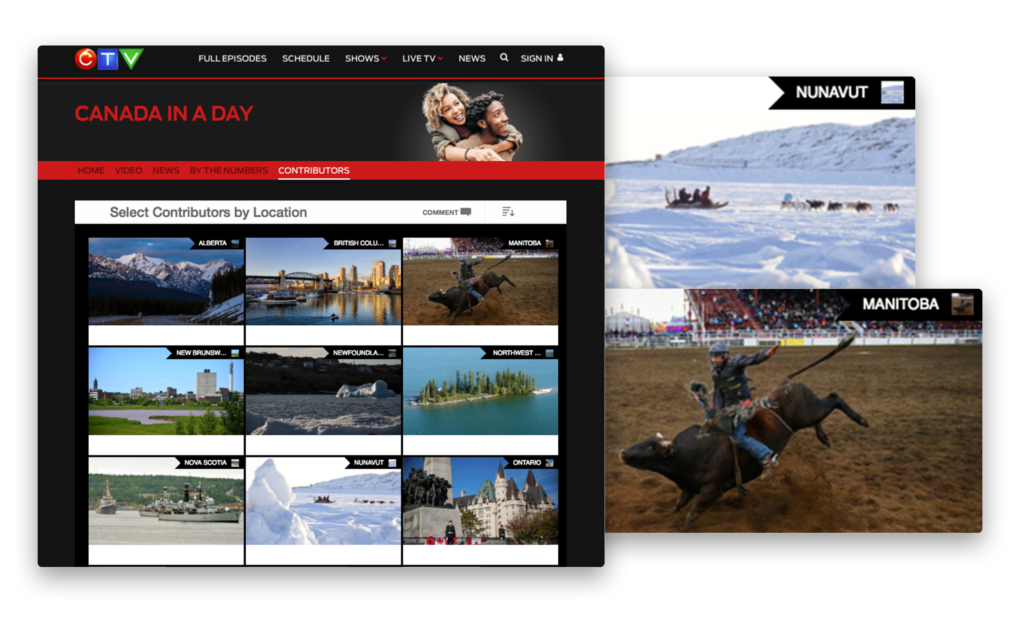 The Pinboard feature was used to organize and visually display all the contributors. Anyone who visited the Canada In A Day section within CTV.ca could select contributor names by province. 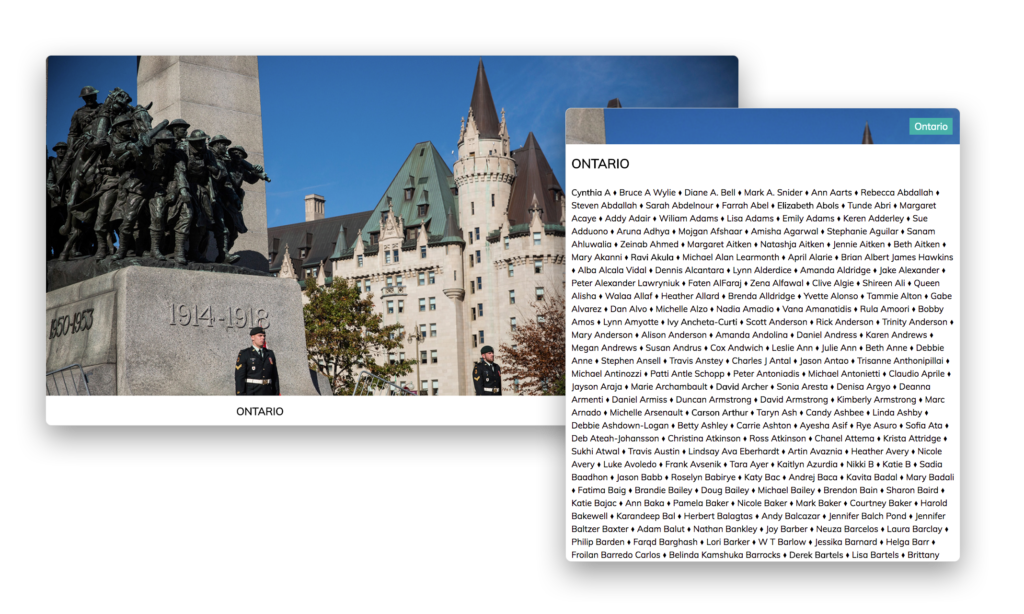 Rock Content Engage allowed Bell Media’s Digital Entertainment Content Team to fulfill their goals for the iHeartRadio MMVAs. They were looking for a way to showcase social media content alongside the site’s own content in a more dynamic way than a live blog. The goal was to create a social wall that captured the event through the eyes of the audience, guests, presenters, and performers. It proved to be amazing behind-the-scenes content and the Pinboard offered easy integration and a great front end interface.

Another benefit of the Pinboard was that it was easy to use and allowed the team to spend more time curating and creating content instead of being preoccupied with how it was going to be executed and distributed throughout the Much.com site.

“It allowed us to not only showcase our content very nicely and give us a better feature to show our audiences, but also, gave our digital content producers more time to spend creating and curating better content.”- Allison Saretsky

Rock Content Engage also enabled Bell Media to meet their content goals for the Canada In A Day documentary. They wanted a way to be able to recognize video contributors. Within the documentary, the team directed viewers to the website, resulting in an increase in visits, page views, and time spent on site.

Bell Media has seen great success by utilizing Rock Content Engage in content campaigns and are impressed by the level of support and collaboration that the Customer Success Team has shown. Allison comments:

“I found the team at Rock Content to be great partners. When asked a question about a project, the response is never, ‘No’, or ‘Our platform doesn’t do that’. It’s more like, ‘Let us think about it and get back to you’. And they do come back and really partner and suggest ideas to you.

We’ve learned a lot more about how to use the Rock Content’s suite of tools because of that partnership. Sometimes when you license a product, the response you get is, ‘Well, we have an online forum where you can look for more information.’ It’s been nice to have a partner who we can talk through ideas with.”

Bell Media has plans to integrate Engage with more brands, including entertainment, lifestyle, and news sites. In addition, they may use the technology for even larger events. 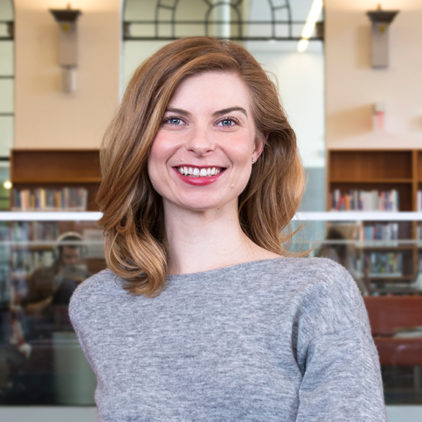 Allison Saretsky is the Senior Product Manager for the Lifestyle & Entertainment digital brands at Bell Media. She holds an MBA, specializing in Technology & Innovation, and is fond of a detective-like approach on-the-job, in a podcast, or book (shout out Nancy Drew!).