The nature of breaking news and live event coverage is that it keeps viewers glued to their screens, awaiting the next update. As audiences can consume content whenever and wherever they want, it’s really difficult for any one platform or organization to stand out from the crowd and capture their attention.

Reuters, the news and media division of Thomson Reuters, is a trusted source of news on topics including business, finance, politics, sports, entertainment, technology and health. Their goal is to provide society with the news it needs to be free, prosperous and informed.

Cassandra Garrison, Social Media and Live News Editor, manages the Reuters official social media accounts including Facebook, Twitter, articles and live blogs that live on the Reuters.com website. With the help of her team, she works to curate breaking news and live coverage as stories develop.

The Need for Live Coverage

The need for compelling real-time coverage to remain relevant in the industry has become increasingly clear. To Reuters, live coverage on events and news around the world is top priority.

“That’s the way that we make sure the stories get the prominence they need” says Cassandra.

With live coverage however, comes the challenge of aggregating an overwhelming number of disparate sources of information. “We struggle to place [stories] prominently on the home page because there are only so many things you can feature there at once,” Cassandra pointed out. There are so many pieces of relevant information coming in every moment during a developing story that static content just doesn’t make sense.

This is where the live blog fits. Reuters has been using Rock Content Engage since 2011. The platform allows them to keep everything in one place, while enabling their team of reporters to contribute to the rolling coverage and promote the same link throughout their networks. This insures that the information is collected and distributed seamlessly.

Cassandra has travelled all around the world for major events and breaking news coverage throughout her years with Reuters. In 2016 alone, she traveled to the World Economic Forum in Davos, the Summer Olympics in Rio, and across the U.S. during the Presidential Elections. She also regularly visits the Reuters New Delhi and London offices in order to train new recruits on the Rock Content Platform. 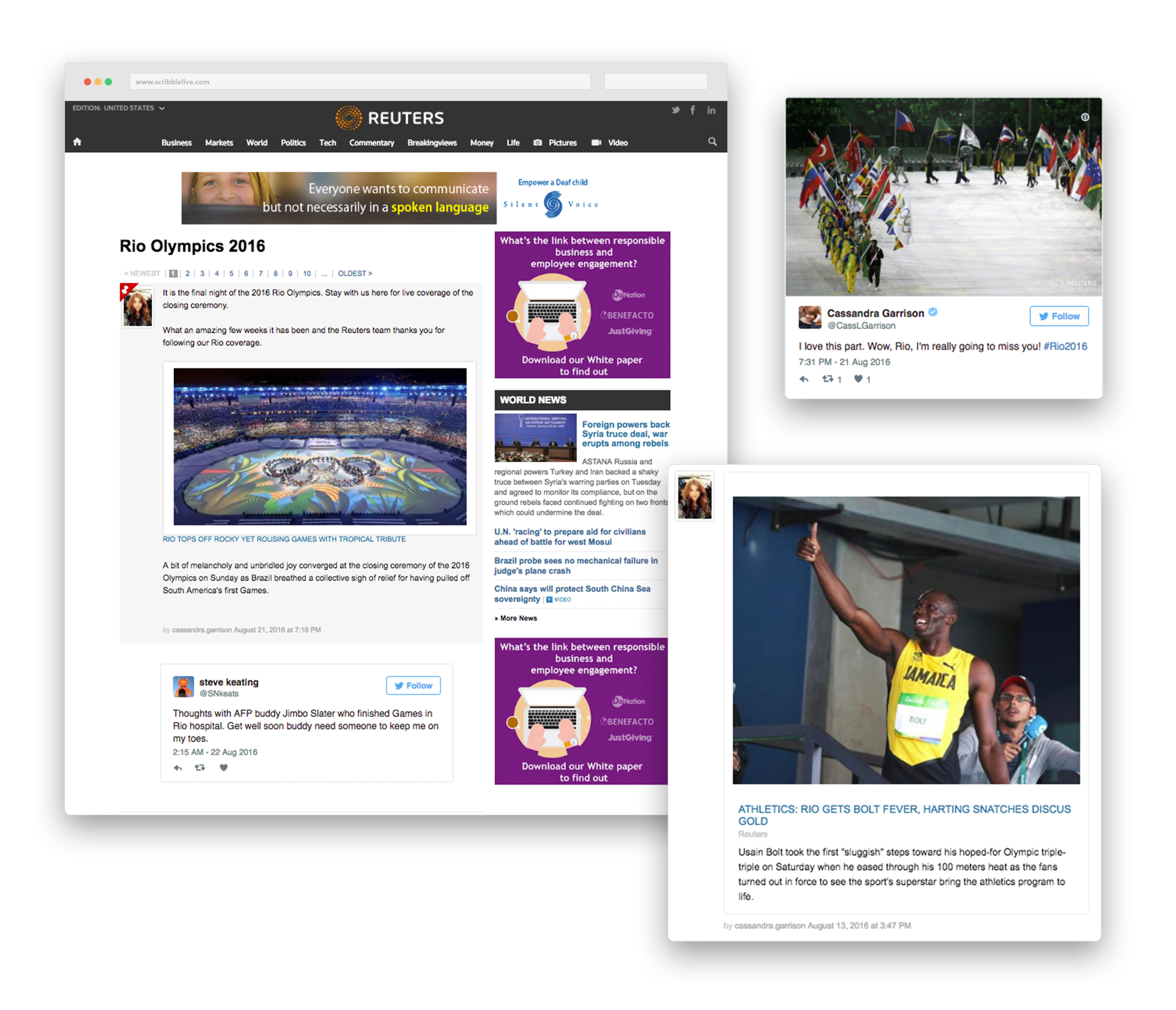 When a story comes in or an event is happening, it takes the coordination of the entire team to cover it, and to ensure everyone is clear about their role so as to avoid “too many cooks in the kitchen”. For a live stream, one person will work to pull in relevant social posts, another may focus on photos and videos, and another will work to update the pinned post with the most recent developments.

Cassandra uses the mobile app when she is in the field, as well as linking her Twitter account to Engage’s social automation in order to pull everything she is tweeting into the live stream. On top of that, she has a desk editor who is stationed at their New York office to moderate and curate everything she is pushing through, ensuring consistent and verified coverage.

By providing her team with one place to collaborate, they are able to produce comprehensive, rolling coverage during these key moments.

The live blog serves as a great solution for when Cassandra and her team have multiple stories around the same event coming out, and they need a one-stop-shop to aggregate them. With breaking news such as the Paris attacks or the U.S. presidential election results, viewers are hungry for minute-by-minute updates.

Reuters funnels all traffic to the live blog through social linking as well as a feature on their website’s homepage, and people catch on really quickly. For the Paris attacks, within the first 24 hours the Reuters live stream coverage experienced more than 1 million page views. The politics live blog, which has run consistently through the presidential primaries, election day and the first 100 days in office, has up to 2000 concurrent viewers at any given time. 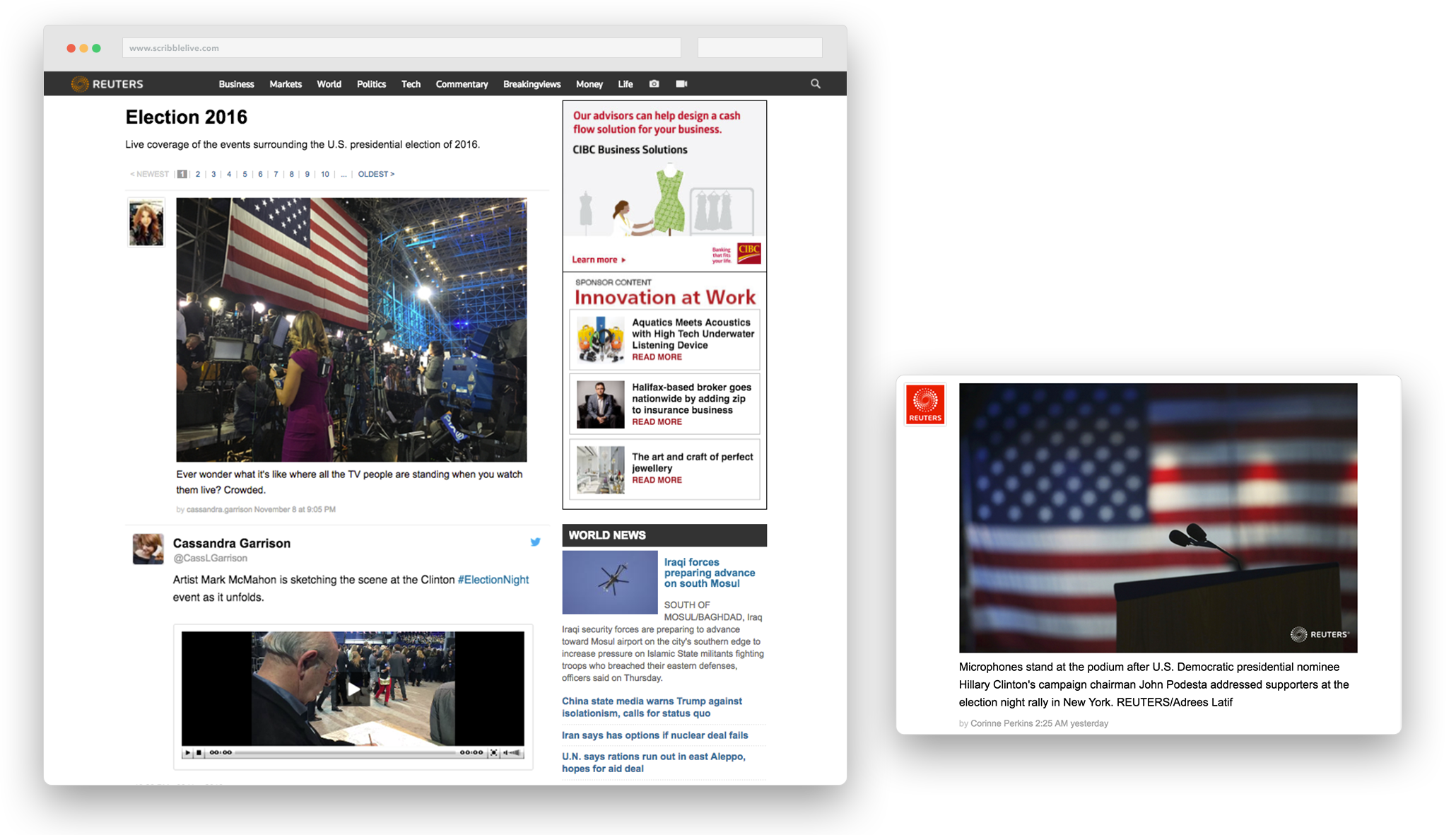 In today’s rapidly changing news climate, updates come daily, hourly, and even minute by minute. Given the demand on the Reuters team to cover multiple stories simultaneously, Rock Content has been able to serve as a one-stop-shop for all of their coverage. This allows their readers to see the story unfold in real time, and come back to the same place again and again, day after day to get the latest from Reuters.