As early as 2009, the City of St.Gallen’s communication team was using Social Media to communicate with its 80,000 inhabitants. The city, which is located in eastern Switzerland, even created its own social media platform that was featured on its website, but there was a problem, says Samuel Fitzi, a member of the city’s communication team. “It won social media prizes, but it didn’t work because it required a login. They preferred the already established Social Media channels.”

Trying to find a different venue for discussion, the organization turned to social media to disseminate administrative information directly to citizens such as construction notices. However, despite having a strong presence on Twitter, Facebook and Instagram, the social posts – which went out up to three or four times a day – weren’t enough, says Fitzi.

“I was looking for something where people could join the discussion, as well as see what we were doing on Twitter and on Facebook – but all on one page,” he says.

In 2015, after stumbling across Rock Content on Blick, one of Switzerland’s largest newspapers, Fitzi realized he had found a solution to his communication problems. “I knew right away that this was the right thing. We had to get it because it was what I was looking for: An offering that had a blogging tool but also something that I could use to aggregate all our social media channels,” he says.

The City of St.Gallen implemented Rock Content earlier this year, handling the entire process internally. This was possible due to “excellent” training and support by the Rock Content team, says Fitzi. “They showed us everything, and we could ask follow up questions whenever we needed. It was fairly easy.” Updating the website daily was simpler, too. Before, if Fitzi wanted to update the city’s site he had to log on to a computer and go deep in the organization’s content management system. “Now I can handle the Rock Content parts from my phone,” he says. “For me that’s the biggest benefit. That and the fact that every time I go on the Rock Content page I see something I can do that improves our live blog.”

Today, the Rock Content portion of the St.Gallen site features a live blog, a Twitter feed, a construction project channel and other elements that keeps citizens up to date, enabling two-way, instant communication. Using these tools, constituents can reach out directly to all of the city’s various departments such as mobility and transportation, economy and employment and education. This ability is especially important in Switzerland, which is a direct democracy, since the people rather than elected officials make decisions both big and small about the country. The more information the city can disseminate, the better prepared its citizens will be when voting on issues. 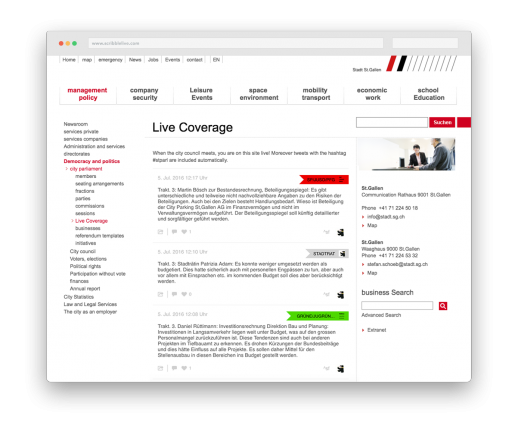 Constituents can follow conversations and discussions more clearly, since – using Rock Content – Fitzi and his colleague color-code conversation threads based on which parliamentary party is doing the talking. “It’s really much easier than it was before when we would try and do it on Twitter. We had to put all that information into 140 characters.”

One of the first things constituents used the tool for was to complain that the color of an online parliamentary flag was the wrong color orange, and Fitzi was able to change the color in real-time with Rock Content.

However, the most important feature of Rock Content is the fact that citizens don’t need to have a social media account to talk to city officials, says Fitzi. They can be “live” in parliament with only a browser and a web connection via PC, tablet or smartphone. “People are telling us it’s good to have this new tool because it’s much easier to read and they like to follow parliament this way. It’s easier to understand.” Members of parliament are happy with the benefits of Rock Content, as well, expressing their satisfaction with the tool in a recent parliamentary session.

People are noticing outside St.Gallen, too. For instance, Martin Fuchs, a popular German policy advisor recently tweeted the following: “German state parliaments can’t do what the City of St.Gallen is able to: Doing a live blog out of a city parliament.” Another newspaper – St.Galler Tagblatt – published an article in which the local MPs highlighted the importance of cities having an active social presence, and praised the city for its implementation of Rock Content and its improved user engagement. 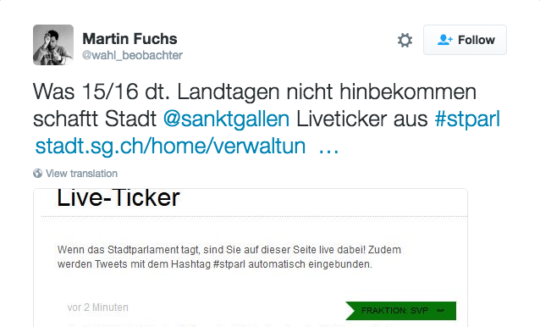 Going forward, Fitzi says the tool can only make things better for the city’s inhabitants. For instance, Fitzi plans on using Rock Content more extensively for big projects as well as regular, one-hour live chats between the city’s authorities and its constituents.

Explains Fitzi: “Rock Content makes it much more interesting for everybody –for us and for the people who are out there watching it.”