The Ultimate Fighting Championship (UFC) is working to increase brand awareness and interest in the sport across Europe, the Middle East, and Africa (EMEA). They wanted to create a second-screen experience for those watching the event on TV and offer a way for viewers to follow the action in real-time. Their goal was to spark interest and drive traffic to their online video subscription channel, UFC Fight Pass.

UFC published their live coverage on ufc.com using a Rock Content ‘microsite,’ a small website hosted on the Rock Content servers. Their live content ran for eight hours on the day of the event, beginning well before the action and ending just after the post-event press conference. The key to the success of their coverage was the extensive content plan UFC built prior to the event. Using the Rock Content platform, UFC was able to plan and schedule content for each of the ten different fights during the event. 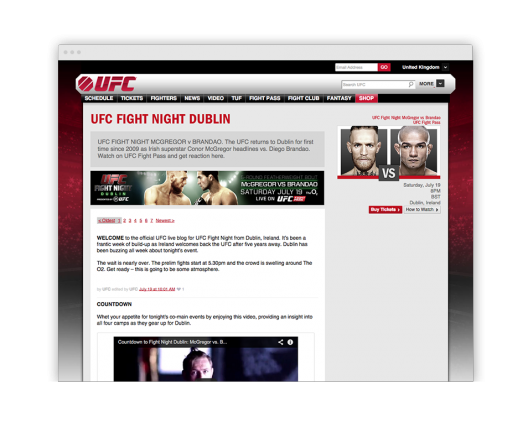 Using Rock Content’s raw feeds (a staging ground for content), the UFC team was able to prepare contextual material beforehand, such as fighter bios and quotes from influential brand ambassadors. They quickly published this pre-planned content during their live coverage with the click of a button. The UFC also incorporated dynamic content including expert analysis of each round, audio files of the fighters’ walk-in music, and fan reactions on Twitter.

Through Rock Content, the UFC’s live coverage of the Dublin fight night helped them to successfully connect their content to their business objectives. Their goal was to reach new audiences, engage fans, and drive UFC Fight Pass Subscription.

In terms of the audience, the live coverage helped attract more than 25,000 unique visitors, which is almost 10 times more than their previous coverage using a different software.

The Scribble Market, a syndication tool, also played a vital role in increasing traffic and amplifying the audience. Syndication to other Rock Content media clients generated 74% of the total unique visitors.

The UFC content team put a significant amount of effort into creating engaging live coverage and their audience stayed on the page for an average of 16.53 minutes.

In addition to generating interest and awareness for the sport, the UFC wanted to drive traffic to their UFC Fight Pass landing page. During the fight night, the live coverage generated over 5,000 unique viewers, which amounts to approximately 20% of the total unique visitors.